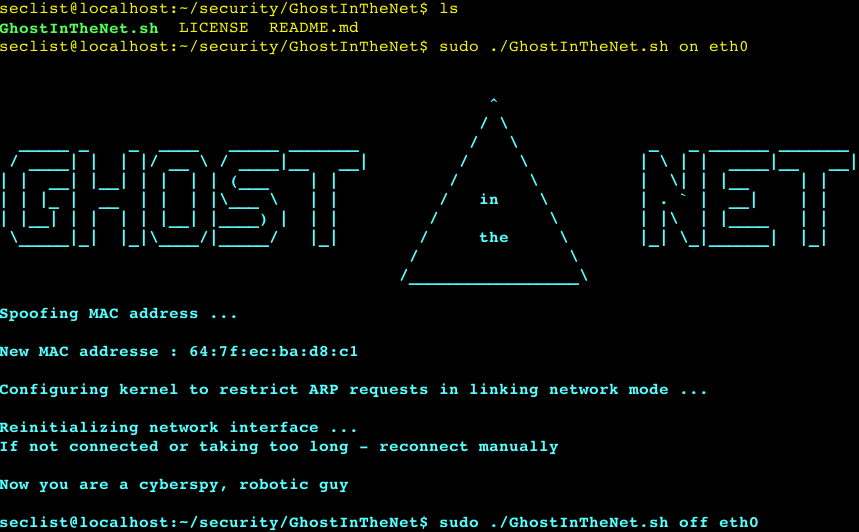 Ultimate Network Stealther that makes Linux a Ghost In The Net and protects from MITM/DOS/scan.
Properties:

How it works
The basic and primary network protocol is ARP for IPv4 and NDP (ICMPv6) for IPv6, located in the link and network layer, provides main connectivity in a LAN.
Despite its utility and simplicity, it has numerous vulnerabilities that can lead to a MITM attack and leak of confidentiality.
Patching of such a widely used standard is a practically impossible task.
A very simple, but at the same time effective solution is to disable ARP and NDP responses on an interface and be very cautious with broadcasting.
Considering the varieties of implementations, this means that anyone in the network wouldn’t be able to communication with such host, only if the host is willing it-self.
The ARP/NDP cache will be erased quickly afterwards.
Here is an example schema:

To increase privacy, it’s advised to spoof the MAC address, which will provide a better concealment.
All this is possible using simple commands in Linux kernel and a script that automates it all.

Analysis
No ARP/NDP means no connectivity, so an absolute stealth and obscurity on the network/link layer.
This protects from all possible DOSes and MITMs (ARP, DNS, DHCP, ICMP, Port Stealing) and far less resource consuming like ArpON.
Such mitigation implies impossibility of being scanned (nmap, arping).
Besides, it doesn’t impact a normal internet or LAN connection on the host perspective.
If you’re connecting to a host, it will be authorised to do so, but shortly after stopping the communication, the host will forget about you because, ARP/NDP tables won’t stay long without a fresh request.
Regarding the large compatibility and cross-platforming, it’s very useful for offsec/pentest/redteaming as well.
You see everyone, but nobody sees you, you’re a ghost.
Mitigation and having real supervision on the network will require deep reconfiguration of OSes, IDPSes and all other equipement, so hardly feasible.

HowTo
You can execute the script after the connection to the network or just before:

This will activate the solution until reboot.
If you want to stop it:

Of course, you will have to make the script executable in the first place:

Notes
ARP/NDP protocol can be exploited for defensive purpose.
Now your Poisontap is literally undetectable and your Tails is even more anonymous.
You should learn some stuff about IPv6.