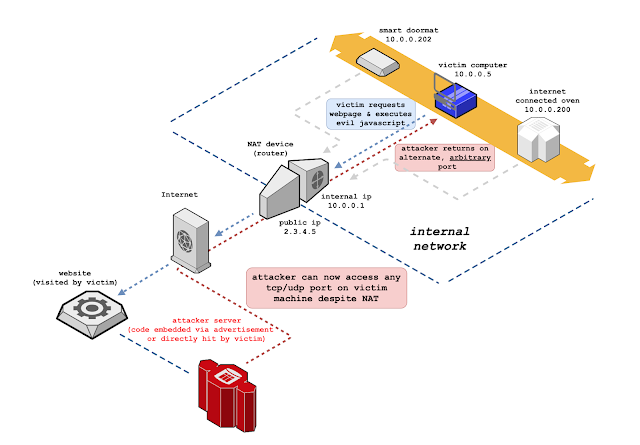 This attack takes advantage of arbitrary control of the data portion of some TCP and UDP packets without including HTTP or other headers; the attack performs this new packet injection technique across all major modern (and older) browsers, and is a modernized version to my original NAT Pinning technique from 2010 (presented at DEFCON 18 + Black Hat 2010). Additionally, new techniques for local IP address discovery are included.

This attack requires the NAT/firewall to support ALG (Application Level Gateways), which are mandatory for protocols that can use multiple ports (control channel + data channel) such as SIP and H323 (VoIP protocols), FTP, IRC DCC, etc.

At a high level, NAT Slipstreaming works like so:

Thanks for reading! You can download the proof of concept code from my NAT Slipstream github.

Find more of my projects at https://samy.pl or potentially reach me at [email protected].