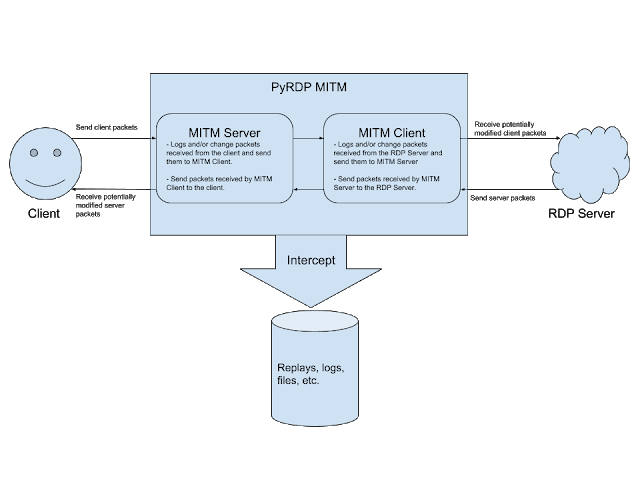 We have used this tool as part of an RDP honeypot which records sessions and saves a copy of the malware dropped on our target machine.
PyRDP was first introduced in a blogpost in which we demonstrated that we can catch a real threat actor in action. In May 2019 a presentation by its authors was given at NorthSec and two demos were performed. The first one covered credential logging, clipboard stealing, client-side file browsing and a session take-over. The second one covered the execution of cmd or powershell payloads when a client successfully authenticates. In August 2019, PyRDP was demo’ed at BlackHat Arsenal (slides).

Installing
We recommend installing PyRDP in a virtual environment to avoid dependency issues.
First, make sure to install the prerequisite packages (on Ubuntu):

On some systems, you may need to install the python3-venv package:

Then, create your virtual environment in PyRDP’s directory:

Finally, you can install the project with Pip:

This should install all the dependencies required to run PyRDP.
If you ever want to leave your virtual environment, you can simply deactivate it:

Note that you will have to activate your environment every time you want to have the PyRDP scripts available as shell commands.

Installing on Windows
The steps are almost the same. There are two additional prerequisites.

Then, create your virtual environment in PyRDP’s directory:

Finally, you can install the project with Pip:

This should install all the dependencies required to run PyRDP.
If you ever want to leave your virtual environment, you can simply deactivate it:

Note that you will have to activate your environment every time you want to have the PyRDP scripts available as shell commands.

Installing with Docker
First of all, build the image by executing this command at the root of PyRDP (where Dockerfile is located):

Afterwards, you can execute the following command to run the container:

For more information about the various commands and arguments, please refer to these sections:

To store the PyRDP output permanently (logs, files, etc.), add the -v option to the previous command. For example:

Make sure that your destination directory is owned by a user with a UID of 1000, otherwise you will get a permission denied error. If you’re the only user on the system, you should not need to worry about this.

Using the player in Docker
Using the player will require you to export the DISPLAY environment variable from the host to the docker. This redirects the GUI of the player to the host screen. You also need to expose the host’s network and stop Qt from using the MIT-SHM X11 Shared Memory Extension. To do so, add the -e and –net options to the run command:

Keep in mind that exposing the host’s network to the docker can compromise the isolation between your container and the host. If you plan on using the player, X11 forwarding using an SSH connection would be a more secure way.

Migrating away from pycrypto
Since pycrypto isn’t maintained anymore, we chose to migrate to pycryptodome. If you get this error, it means that you are using the module pycrypto instead of pycryptodome.

You will need to remove the module pycrypto and reinstall PyRDP.

When running the MITM for the first time on Linux, a private key and certificate should be generated for you in ~/.config/pyrdp. These are used when TLS security is used on a connection. You can use them to decrypt PyRDP traffic in Wireshark, for example.

Connecting to the PyRDP player
If you want to see live RDP connections through the PyRDP player, you will need to specify the ip and port on which the player is listening using the -i and -d arguments. Note: the port argument is optional, the default port is 3000.

Connecting to a PyRDP player when the MITM is running on a server
If you are running the MITM on a server and still want to see live RDP connections, you should use SSH remote port forwarding to forward a port on your server to the player’s port on your machine. Once this is done, you pass 127.0.0.1 and the forwarded port as arguments to the MITM. For example, if port 4000 on the server is forwarded to the player’s port on your machine, this would be the command to use:

Running payloads on new connections
PyRDP has support for running console commands or PowerShell payloads automatically when new connections are made. Due to the nature of RDP, the process is a bit hackish and is not always 100% reliable. Here is how it works:

For this to work, you need to set 3 arguments:

Setting the payload
You can use one of the following arguments to set the payload to run:

Choosing when to start the payload
For the moment, PyRDP does not detect when the user is logged on. You must give it an amount of time to wait for before running the payload. After this amount of time has passed, it will send the fake key sequences and expect the payload to run properly. To do this, you use the --payload-delay argument. The delay is in milliseconds. For example, if you expect the user to be logged in within the first 5 seconds, you would use the following arguments:

This could be made more accurate by leveraging some messages exchanged during RDPDR initialization. See this issue if you’re interested in making this work better.

Other MITM arguments
Run pyrdp-mitm.py --help for a full list of arguments.

Using the PyRDP Player
Use pyrdp-player.py to run the player.

Playing a replay file
You can use the menu to open a new replay file: File > Open.
You can also open replay files when launching the player:

Other player arguments
Run pyrdp-player.py --help for a full list of arguments.

The -o parameter defines the path name to use for the generated private key.

Using a custom private key
If you want to use your own private key instead of generating a new one:

Other cloner arguments
Run pyrdp-clonecert.py --help for a full list of arguments.

Using PyRDP as a Library
If you’re interested in experimenting with RDP and making your own tools, head over to our documentation section for more information.

Using PyRDP with Bettercap
We developped our own Bettercap module, rdp.proxy, to man-in-the-middle all RDP connections on a given LAN. Check out this document for more information.

Bettercap v2.0 – The State Of The Art Network Attack And Monitoring Framework