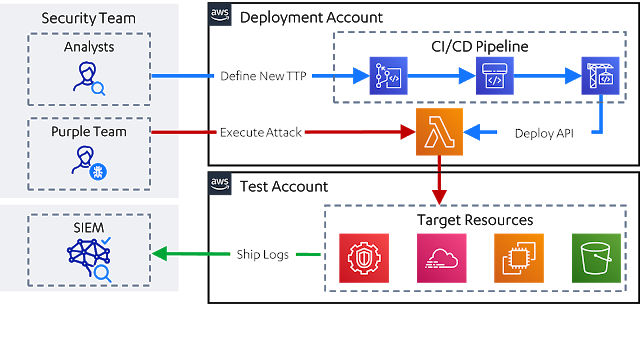 Leonidas is a framework for executing attacker actions in the cloud. It provides a YAML-based format for defining cloud attacker tactics, techniques and procedures (TTPs) and their associated detection properties. These definitions can then be compiled into:

The API is deployed via an AWS-native CI/CD pipeline. Instructions for this can be found at Deploying Leonidas.

The API is invoked via web requests secured by an API key. Details on using the API can be found at Using Leonidas

To build documentation or Sigma rules, you’ll need to install the generator locally. You can do this by:

Sigma rules can be generated as follows:

The rules will then appear in ./output/sigma

The documentation is generated as follows:

This will produce markdown versions of the documentation available at output/docs. This can be uploaded to an existing markdown-based documentation system, or the following can be used to create a prettified HTML version of the docs:

This will create a output/site folder containing the HTML site. It is also possible to view this locally by running mkdocs serve in the same folder.

The definitions are written in a YAML-based format, for which an example is provided below. Documentation on how to write these can be found in Writing Definitions

This project drew ideas and inspiration from a range of sources, including: