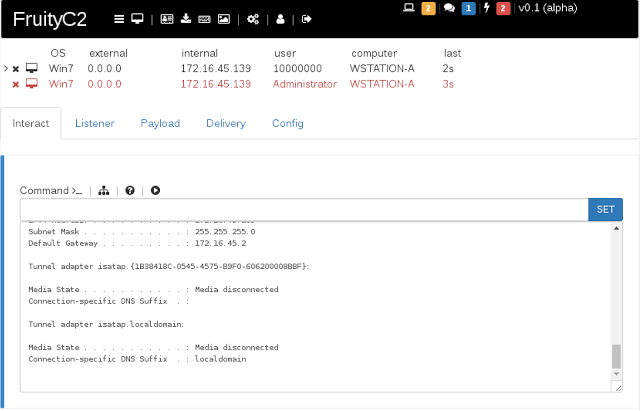 This is the initial release for FruityC2 (alpha version). Can be installed on any linux system, but the installation scripts are made for Debian based systems. There are a lot of functionalities that will be include in future releases, and probably a lot of code will be changed, but this version is enough to show FruityC2.

FruityC2 is a post-exploitation (and open source) framework based on the deployment of agents on compromised machines. Agents are managed from a web interface under the control of an operator.

It works as a command-and-control model and is language and system agnostic. New agents are being developed to expand the capabilities and options for FruityC2.

A web client is used to interact with the FruityC2 API in a client/server mode. The client is a single web page divided into 5 sections: Interact, Listener, Payload, Delivery, Config. These options provide full control and access to the functions included in FruityC2 to create, deliver and interact with a functioning C2 capability.

During the development of the initial alpha version, I divided the efforts between the client and the server, but mainly on the client.
The next steps are to improve the Stager and Agent, add more functionalities and commands, and I will start developing new stagers and agents for other OS systems.
Note: The current Stager and Agent can be only executed on Windows (powershell), but this will be extended in future releases to other systems and file types.

Method 1: Standard installer (Server)
script: install.sh
Note: you need to download the master.zip file or to clone the repository (FruityC2).

FruityC2 Server
Edit the file config/settings.conf and add the IP (from where FruityC2-Client will be used) in section:

download-modules-extra.sh
This script can be used to download extra modules from the projects: Empire, PowerSploit, PowerShell-AD-Recon and Nishang

reset.sh
This script can be used to backup the data, logs and config files to then reset the server data.