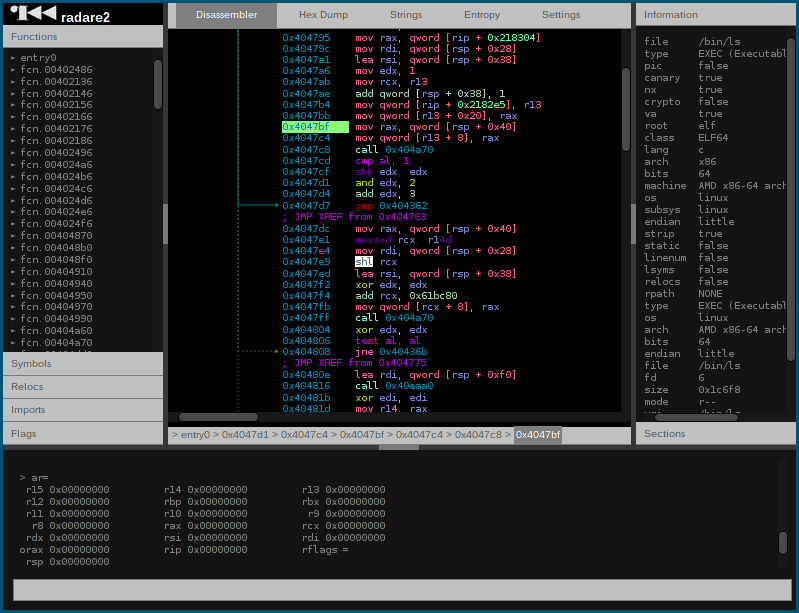 r2 is a rewrite from scratch of radare in order to provide a set of libraries and tools to work with binary files.
The radare project started as a forensics tool, a scriptable command-line hexadecimal editor able to open disk files, but later support for analyzing binaries, disassembling code, debugging programs, attaching to remote gdb servers, …
radare2 is portable.

Dependencies
radare2 can be built without any special dependency, just use make and get a working toolchain (gcc, clang, tcc, ..)
Optionally you can use libewf for loading EnCase disk images.
To build the bindings you need latest valabind, g++ and swig2.

Install
The easiest way to install radare2 from git is by running the following command:

If you want to install radare2 in the home directory without using root privileges and sudo, simply run:

Building with meson + ninja
The sys/install.sh method uses acr+make to build r2 from sources, which is the default and recommended way, but there’s also a work-in-progress support for Meson.
Run first the configuration process:

You can install last version of meson and ninja using r2pm:

Or just run those lines if you have them available in PATH:

The PREFIX is inherited from the last run of ./configure, so it’s recommended to run sys/install.sh at least once to autodetect this, this step will end up into meson.
At the moment, the meson build system doesnt supports much configuration options and it is not able to build all the plugins, it has been tested to work on the following hosts:

Uninstall
In case of a polluted filesystem you can uninstall the current version or remove all previous installations:

Package manager
Radare2 has its own package manager – r2pm. It’s packages repository is on GitHub too. To start to use it for the first time you need to initialize packages:

Refresh the packages database before installing any package:

To install a package use the following command:

Bindings
All language bindings are under the r2-bindings directory. You will need to install swig and valabind in order to build the bindings for Python, Lua, etc..
APIs are defined in vapi files which are then translated to swig interfaces, nodejs-ffi or other and then compiled.
The easiest way to install the python bindings is to run:

In addition there are r2pipe bindings, which are an API interface to interact with the prompt, passing commands and receivent the output as a string, many commands support JSON output, so it’s integrated easily with many languages in order to deserialize it into native objects.

Regression Testsuite
Running make tests it will fetch the radare2-regressions repository and run all the tests in order to verify that no changes break a functionality.
We run those tests on every commit, and they are also executed with ASAN and valgrind on different platforms to catch other unwanted ‘features’.

Documentation
There is no formal documentation of r2 yet. Not all commands are compatible with radare1, so the best way to learn how to do stuff in r2 is by reading the examples from the web and appending ‘?’ to every command you are interested in.
Commands are small mnemonics of few characters and there is some extra syntax sugar that makes the shell much more pleasant for scripting and interacting with the apis.
You could also checkout the radare2 book.

Webserver
radare2 comes with an embedded webserver that serves a pure html/js interface that sends ajax queries to the core and aims to implement an usable UI for phones, tablets and desktops.

To use the webserver on Windows, you require a cmd instance with administrator rights. To start the webserver use command in the project root.