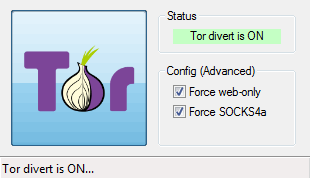 Tallow is a small program that redirects all outbound traffic from a Windows machine via the Tor anonymity network. Any traffic that cannot be handled by Tor, e.g. UDP, is blocked. Tallow also intercepts and handles DNS requests preventing potential leaks.
Tallow has several applications, including:

Usage
Using the Tallow GUI, simply press the big “Tor” button to start redirecting traffic via the Tor network. Press the button again to stop Tor redirection. Note that your Internet connection may be temporarily interrupted each time you toggle the button.
To test if Tor redirection is working, please visit the following site: https://check.torproject.org.

Technical
Tallow uses the following configuration to connect to the Internet:

Here (a.b.c.d) represents the local address, and (x.y.z.w) represents a remote server.
Tallow uses WinDivert to intercept all traffic to/from your PC. Tallow handles two main traffic types: DNS traffic and TCP streams.
DNS queries are intercepted and handled by Tallow itself. Instead of finding the real IP address of a domain, Tallow generates a pseudo-random “fake” domain (in the range 44.0.0.0/24) and uses this address in the query response. The fake-IP is also associated with the domain and recorded in a table for later reference. The alternative would be to look up the real IP via the Tor (which supports DNS). However, since Tallow uses SOCKS4a the real IP is not necessary. Handling DNS requests locally is significantly faster.
TCP connections are also intercepted. Tallow “reflects” outbound TCP connects into inbound SOCKS4a connects to the Tor program. If the connection is to a fake-IP, Tallow looks up the corresponding domain and uses this for the SOCKS4a connection. Otherwise the connection is blocked (by default) or a SOCKS4 direct connection via Tor is used. Connecting TCP to SOCKS4(a) is possible with a bit of magic (see redirect.c).
All other traffic is simply blocked. This includes all inbound (non-Tor) traffic and outbound traffic that is not TCP nor DNS. In addition, Tallow blocks all domains listed in the hosts.deny file. This includes domains such as Windows update, Windows phone home, and some common ad servers, to help prevent Tor bandwidth wastage. It is possible to edit and customize your hosts.deny file as you see fit.
Note that Tallow does not intercept TCP ports 9001 and 9030 that are used by Tor. As a side-effect, Tallow will not work on any other program that uses these ports.

History
Tallow was derived from the TorWall prototype (where “tallow” is an anagram of “torwall” minus the ‘r’).
Tallow works slightly differently, and aims to redirect all traffic rather than just HTTP port 80. Also, unlike the prototype, Tallow does not use Privoxy nor does it alter the content of any TCP streams in any way (see warnings below).

Building
To build Tallow you need the MinGW cross-compiler for Linux.
You also need to download and place the following external dependencies and place them in the contrib/ directory:

Then simply run the build.sh script.