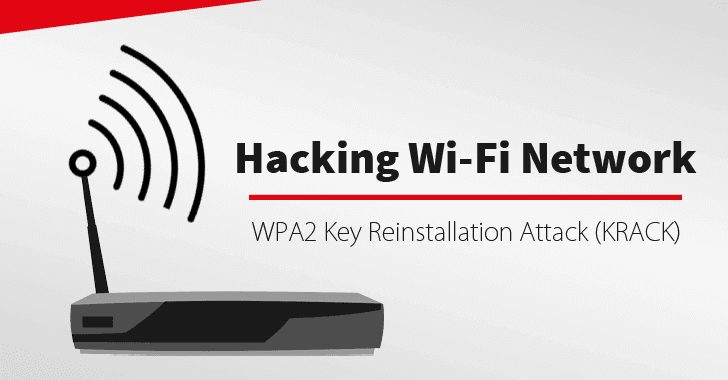 Security researchers have discovered several key management vulnerabilities in the core of Wi-Fi Protected Access II (WPA2) protocol that could allow an attacker to hack into your Wi-Fi network and eavesdrop on the Internet communications.

WPA2 is a 13-year-old WiFi authentication scheme widely used to secure WiFi connections, but the standard has been compromised, impacting almost all Wi-Fi devices—including in our homes and businesses, along with the networking companies that build them.

Since the weaknesses reside in the Wi-Fi standard itself, and not in the implementations or any individual product, any correct implementation of WPA2 is likely affected.

According to the researchers, the newly discovered attack works against:

Access Points (APs) might contain a vulnerable implementation of the Fast BSS Transition (FT) handshake. More precisely, a retransmitted or replayed FT Reassociation Request may trick the AP into reinstalling the pairwise key. If the AP does not process retransmitted FT reassociation requests, or if it does not reinstall the pairwise key, it is not vulnerable. If it does reinstall the pairwise key, the effect is similar to the attack against the 4-way handshake, except that the AP instead of the client is now reinstalling a key. More precisely, the AP will subsequently reuse packet numbers when sending frames protected using TKIP, CCMP, or GCMP. This causes nonce reuse, voiding any security these encryption schemes are supposed to provide. Since the packet number is also used as a replay counter for received frames, frames sent towards the AP can also be replayed.

In contrast to the 4-way handshake and group key handshake, this is not an attack against the specification. That is, if the state machine as shown in Figure 13-15 of the 802.11-2016 standard is faithfully implemented, the AP will not reinstall the pairwise keys when receiving a retransmitted FT Reassociation Request. However, we found that many APs do process this frame and reinstall the pairwise key.

We created scripts to determine whether an implementation is vulnerable to any of our attacks. These scripts were tested on Kali Linux. To install the required dependencies on Kali, execute:

Remember to disable Wi-Fi in your network manager before using our scripts. After doing so, execute sudo rfkill unblock wifi so our scripts can still use Wi-Fi.

The included Linux script krack-ft-test.py can be used to determine if an AP is vulnerable to our attack. The script contains detailed documentation on how to use it:

Essentially, it wraps a normal wpa_supplicant client, and will keep replaying the FT Reassociation Request (making the AP reinstall the PTK). We tested the script on a Kali Linux distribution using a USB WiFi dongle (a TP-Link WN722N v1).

Remember that this is not an attack script! You require credentials to the network in order to test if an access point is affected by the attack.

Here there was a benign retransmission of a data frame, because both frames used the same sequence number (seq). This wrongly got detected as IV reuse. There is code to fix this ready, but merging those fixes may take some time.

If the implementation is vulnerable, the suggested fix is similar to the one of the 4-way handshake. That is, a boolean can be added such that the first FT Reassociation Requests installs the pairwise keys, but any retransmissions will skip key installation. Note that ideally the AP should still send a new FT Reassociation Response, even though it did not reinstall any keys.

Exploiting this vulnerability does not require a man-in-the-middle position! Instead, an adversary merely needs to capture a Fast BSS Transition handshake and save the FT Reassociation Request. Because this frame does not contain a replay counter, the adversary can replay it at any time (and arbitrarily many times). Each time the vulnerable AP receives the replayed frame, the pairwise key will be reinstalled. This attack is illustrated in Figure 9 of the paper.

The included network trace example-ft.pcapng is an example of the attack executed against Linux’s hostapd. When using the wireshark filter wlan.sa == 7e:62:5c:7a:cd:47, notice that packets 779 to 1127 all use the CCMP IV value 1. This was caused by malicious retransmissions of the FT reassociation request.