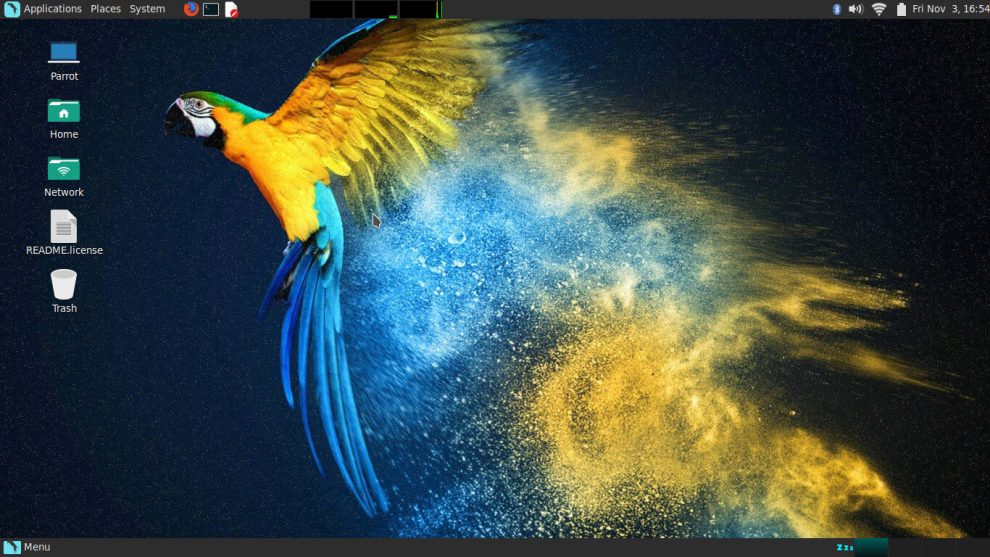 Security GNU/Linux distribution designed with cloud pentesting and IoT security in mind.
It includes a full portable laboratory for security and digital forensics experts, but it also includes all you need to develop your own softwares or protect your privacy with anonymity and crypto tools.
Details
Security
Parrot Security includes a full arsenal of security oriented tools to perform penetration tests, security audits and more. With a Parrot usb drive in your pocket you will always be sure to have all you need with you.
Privacy
Parrot includes by default TOR, I2P, anonsurf, gpg, tccf, zulucrypt, veracrypt, truecrypt, luks and many other tecnologies designed to defend your privacy and your identity.
Development
If you need a comfortable environment with updated frameworks and useful libraries already installed, Parrot will amaze you as it includes a full development-oriented environment with some powerful editors and IDEs pre-installed and many other tools installable from our repository.
Features
System Specs
Cryptography
Parrot includes many cryptographic softwares which are extremely useful when it comes to protect your confidential data and defend your privacy.
Parrot includes several cryptographic front-ends to work both with symmetric and asymmetric encryption, infact it natively supports volumes encryption with LUKS, TrueCrypt, VeraCrypt and the hidden TrueCrypt/VeraCrypt volumes with nested algorythms support.
The whole system can be installed inside an encrypted partition to protect your computer in case of theft.
Another swiss army knife of your privacy is GPG, the GNU Privacy Guard, an extremely powerful PGP software that lets you create a private/public pair of keys to apply digital signatures to your messages and to allow other people to send you encrypted messages that only your private key can decrypt, in can also handle multiple identities and subkeys, and its power resides in its ring of trust as PGP users can sign each other’s keys to make other people know if a digital identity is valid or not.
Even our software repository is digitally signed by GPG, and the system automatically verifies if an update was altered or compromised and it refuses to upgrade or to install new software if our digital signature is not found or not valid.
Privacy
Your privacy is the most valuable thing you have in your digital life and the whole Parrot Team is exaggeratedly paranoid when it comes to users privacy, infact our system doesn’t contain tracking systems, and it is hardened in deep to protect users from prying eyes.
Parrot has developed and implemented several tricks and softwares to achieve this goal, and AnonSurf is one of the most important examples, it is a software designed to start TOR and hijack all the internet traffic made by the system through the TOR network, we have also modified the system to make it use DNS servers different from those offered by your internet provider.
Parrot also includes torbrowser, torchat and other anonymous services, like I2P, a powerful alternative to TOR.
Programming
The main goal of an environment designed by hackers for hackers is the possibility to change it, adapt it, transform it and use it as a development platform to create new things, this is why Parrot comes out of the box with several tools for developers such as compilers, disassemblers, IDEs, comfortable editors and powerful frameworks.
Parrot includes QTCreator as its main C, C++ and Qt framework. Another very useful tool is Geany, a lightweight and simple IDE which supports a huge amount of programming languages, while we also include Atom, the opensource editor of the future developed by GitHub, and many compilers and interpreters with their most important libraries are pre-installed and ready to use.
And of course many other editors, development softwares and libraries are available through our software repository where we keep all the development tools always updated to their most cutting edge but reliable version.

Parrot 3.9 is now ready, and it includes some important new features that were introduced to make the system more secure and reliable.
The most important feature is the new sandbox system, introduced to protect many applications from 0day attacks out of the box. The sandbox is based on firejail, a suid program which is very easy to configure and customize to protect many critical applications in a quick and effective way (if an application does not work as expected, customize the corresponding firejail profile to be more permissive).