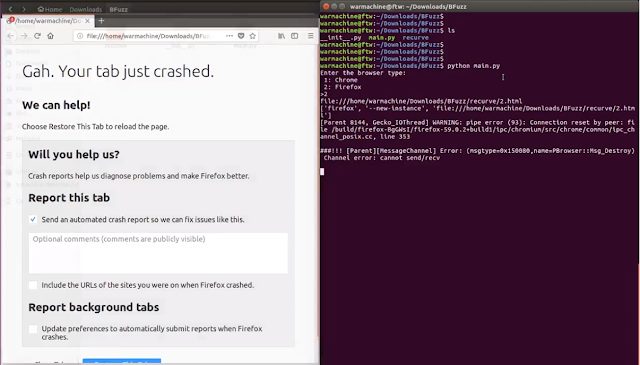 BFuzz is an input based fuzzer tool which take .html as an input, open’s up your browser with a new instance and pass multiple testcases generated by domato which is present in recurve folder of BFuzz, more over BFuzz is an automation which performs same task repeatedly.

Running python BFuzz.py will ask for option weather to fuzz Chrome or Firefox, however if selected 2 this will open firefox firefox --new-instance and randomly open any of the testcase from recurve create the logs on the terminal wait for 3 seconds again it will open firefox and the same process continue so on.
BFuzz is a small .py script which enable’s to open browser run testcase for 12 seconds then close wait for 3 seconds and again follow the same process.

Domato
The testcase’s in recurve are generated by domato generator.py contains the main script. It uses grammar.py as a library and contains additional helper code for DOM fuzzing.
grammar.py contains the generation engine that is mostly application-agnostic and can thus be used in other (i.e. non-DOM) generation-based fuzzers. As it can be used as a library, its usage is described in a separate section below.
.txt files contain grammar definitions. There are 3 main files, html.txt, css.txt and js.txt which contain HTML, CSS and JavaScript grammars, respectively. These root grammar files may include content from other files.