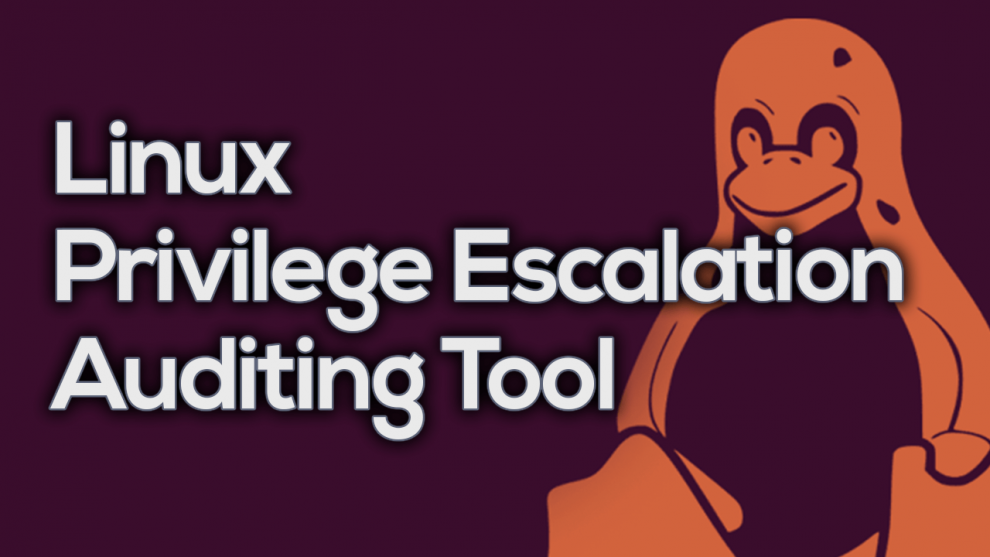 Often during the penetration test engagement the security analyst faces the problem of identifying privilege escalation attack vectors on tested Linux machine(s). One of viable attack vectors is using publicly known Linux exploit to gain root privileges on tested machine. Of course in order to do that the analyst needs to identify the right PoC exploit, make sure that his target is affected by the associated vulnerability and finally modify the exploit to suit his target. The linux-exploit-suggester.shtool is designed to help with these activities.

The tool is meant to assist the security analyst in his testing for privilege escalation opportunities on Linux machine, it provides following features:

In this mode the analyst simply provides kernel version (--kernel switch) or uname -a command output (--uname switch) and receives list of candidate exploits for a given kernel version.

Using this mode one can also check for candidate user space exploits (with --pkglist-file switch) if he has access to installed packages listing (output of dpkg -l/rpm -qa commands) of examined system.

The basic idea behind this mode is the same as previously but additionally in an effort to produce more relevant list of candidate exploits, the tool also performs series of additional checks (like: kernel build settings aka CONFIG_*, sysctl entries and other custom checks) to rule out exploits that for sure won’t be applicable due to OS customization. So for example for ‘af_packet’ exploit which requirements looks like this:

the script (in addition to checking kernel version) will check if target kernel was built with CONFIG_USER_NS and if sysctl entry kernel.unprivileged_userns_clone is enabled. Optionally those additional checks can by skipped by running with --skip-more-checks command line switch.

Example of script’s output in this mode:

In this mode the analyst already posesses partial/full list of CVEs that affects his target kernel and wants to verify if there are any publicly known exploits against this CVEs. Of course efectivness of this mode highly depends on completness of provided CVE list. Such list is usually constructed by manual study and examination of distribution’s Changelog for the given kernel version. Alternatively for most popular distros Oracle’s Ksplice Inspector could be used to speed up this proccess. For example following oneliner worked quite fine for me:

WARNING. By default in addition to comparing CVE IDs, this mode also performs additional checks to rule out exploits that won’t be applicable due to OS customization (kernel build settings aka CONFIG_*, sysctl entries and other custom settings). So for the best possible results one should run it directly on tested machine or alternatively use --skip-more-checks command line switch if running on the target is not possible/not desired.

WARNING. This mode is in beta currently.

This mode is meant to be a modern continuation of checksec.sh‘s --kernel switch functionality.

In this mode linux-exploit-suggester.sh enumerates target system for various kernel/hardware security features (KASLR, SMEP, etc.) and settings. It checks if given protection mechanism is available (builtin into the kernel): [ Available ] and (if applicable) it check if it can be disabled/enabled without recompiling the kernel (via sysctl entry or other means): [ Enabled/Disabled ] or shows [ N/A] if disabling/enabling is not possible/not supported.

Example of script’s output in this mode:

Default run on target machine (kernel version, packages versions and additional checks as described in “Overview” paragraph are performed to give the list of possible exploits:

As previously but only userspace exploits are checked:

Check if exploit(s) for given list of CVE IDs are available:

Generate list of CVEs for the target kernel and check if exploit(s) for it exists (also performs additional checks):

Running with -k option is handy if one wants to quickly examine which exploits could be potentially applicable for given kernel version (this is also compatibility mode with Linux_Exploit_Suggester):

Optionally --pkglist-file <file> could be provided to -k or --uname to also check for user space exploits:

In terms of generated list of exploits its identical with executing (directly on the given remote machine):

Sometimes it is desired to examine only package listing (in this case only check for userspace exploits is performed):

As previously but no package versioning is performed (handy for quick preliminary checking if any package for which user space exploit is available is installed):

Kernel version number is taken from current OS, sources for possible exploits are downloaded to current directory (only kernel space exploits are examined):

Kernel version number is taken from current OS, binaries for applicable exploits are downloaded (if available) to current directory, additional checks are skipped:

Note however that --fetch-binaries is not recommended as it downloads binaries from generally not trusted sources and most likely these binaries weren’t compiled for your target anyway. It should be used as a kind of last resort option when you’re running out of time during your pen testing engagement and there is no compiler available on your target at hand.