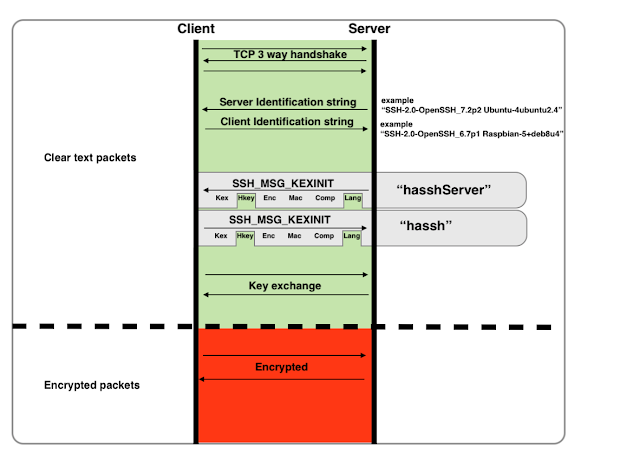 “HASSH” is a network fingerprinting standard which can be used to identify specific Client and Server SSH implementations. The fingerprints can be easily stored, searched and shared in the form of an MD5 fingerprint.

What can HASSH help with:

“hassh” and “hasshServer” are MD5 hashes constructed from a specific set of algorithms that are supported by various SSH Client and Server Applications. These algorithms are exchanged after the initial TCP three-way handshake as clear-text packets known as “SSH_MSG_KEXINIT” messages, and are an integral part of the setup of the final encrypted SSH channel. The existence and ordering of these algorithms is unique enough such that it can be used as a fingerprint to help identify the underlying Client and Server application or unique implementation, regardless of higher level ostensible identifiers such as “Client” or “Server” strings.

Credits:
hassh and hasshServer were conceived and developed by Ben Reardon (@benreardon) within the Detection Cloud Team at Salesforce, with inspiration and contributions from Adel Karimi (@0x4d31) and the JA3 crew crew:John B. Althouse , Jeff Atkinson and Josh Atkins