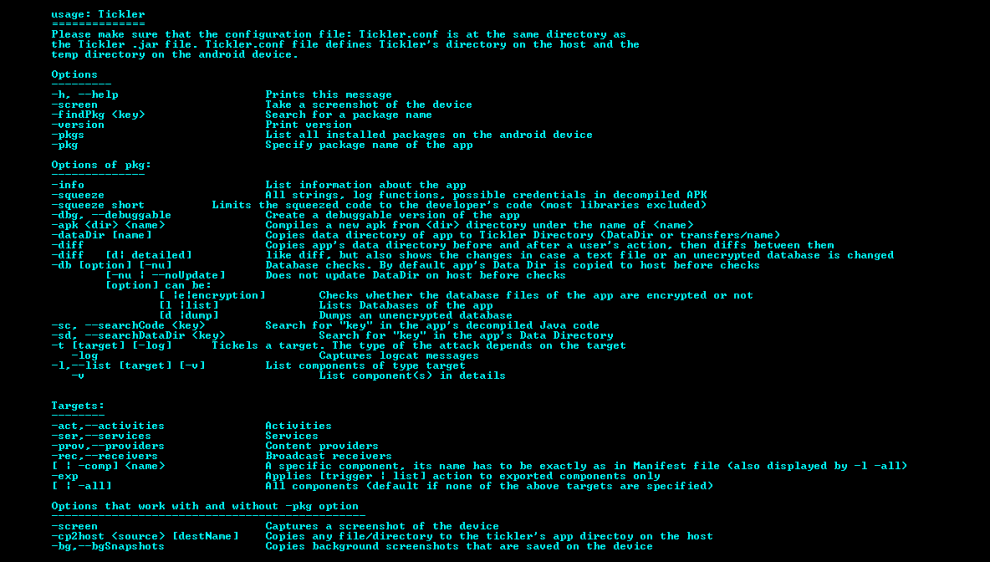 A java tool that helps to pentest Android apps faster, more easily and more efficiently. AndroTickler offers many features of information gathering, static and dynamic checks that cover most of the aspects of Android apps pentesting. It also offers several features that pentesters need during their pentests. AndroTickler also integrates with Frida to provide method tracing and manipulation. It was previously published under the name of Tickler.

AndroTickler highly depends on the following tools, so they should exist on your machine before using it:

Other tools are required for some features, but AndroTickler can still run without them:

How to use it

The current version does the following:

Searches for an app (package) installed on the device, whose package name contains the searchKey

Any command with a -pkg option (whether used with any of the following options or not), does the following actions if they have not been done before:

Fetches the following from the decompiled Java code of the app:

Unsurprisingly, its output is usually huge, so it is recommended to redirect the command’s output to a file

short Squeezes only the decompiled code that belongs to the developer. For example, if an app has a package name of com.notEnaf.myapp, then squeeze short squeezes only the code in com/notEnaf directory.

Squeezes the code only in codeLocation directory. Helpful to limit your search or squeeze the source code if available.

Lists all components of the app

Listing any kind of components

By default, all -db commands update the app’s data storage directory on the host before running the check.

d|detailed Does the same as the normal -diff command, also shows what exactly changed in text files and unencrypted databases.

Searches for the key in the following locations:

Replaces the decompiled Java code location with the custom location.

Triggers components of the app, by all possible combinations of intents. For example, if an activity has an intent-filter of 2 possible actions and 3 data URI schemes, then AndroTickler will trigger this activity with all possible combinations of this intent. Additionally, AndroTickler captures the intent extras mentioned in the Java class corresponding to the component, assign them dummy values and add them to the possible intent combinations. Only extras of type boolean, string, int and float are supported.

Before triggering components, AndroTickler prints all the commands to be executed. Then for each command, it triggers the component, prints the command then waits for the user. This gives the user enough time to do any extra checks after the command’s execution. Before the user moves on to the next command, he’s given the option to capture a screenshot of the device for PoC documentation.

if no value, then the target is all of the above

[-comp] <component_name> Specifies one component only. You can also use <component_name> directly without -comp flag. -exp AndroTickler uses normal privileges to trigger only the exported targets. -all The default option. AndroTickler uses root privileges to trigger the exported targets -log Captures all logcat messages generated during the triggering session. Log file is saved in logs subdirectory.

Frida should be installed on your host machine. Also the location of Frida server on the Android device should be added to Tickler.conf file in the Frida_server_path entry

reuse In case of vals and set options, Frida creates/updates a Frida script of that functionality. You can modify the created script as you want, then if you want to run it through AndroTickler, then use -reuse option so that it doesn’t get overridden.

Runs a frida JS script located at scriptPath on your host

Creates a debuggable version of the app, which can be installed on the device and debugged using any external tool. AndroTickler comes with a keystore to sign the debuggable apk, but it requires jarsigner tool on the host.

Builds an apk file from a directory, signs it and installs it.

Copies the background snapshots taken by the device (works with and without -pkg option) to bgSnapshots subdirectory.

Copies Data storage directory to DataDir dest Optional name of the destination directory, which will be located anyway at transfers sudirectory.

If dest option is not given then the directory’s name will be the timestamp of the transaction.

For the options that do not require -pkg option, their data will be saved at Tickler_Dir/NoPackage

DroidFiles – Get Files From Android Directories